In 1980, JoAnnaFilomena moved from New York City back to Washington, DC to be closer to her family and her aging mother, Filomena. Having come from New York, JoAnna decided to take some time off to enjoy the company of her friends and family in the Washington, D.C. area.

After spending a few weeks dining out in D.C., JoAnna realized that she didn’t really find any restaurants that offered more than a quick meal with unmemorable atmosphere and service within the metro area. JoAnna also quickly realized that she wasn’t really quite ready to have so much time on her hands and saw a need for an Italian restaurant of the style that she had come to know in New York — a place where dinner was more than just a meal and a trip home.

While putting together ideas for an Italian restaurant project, JoAnna began sharing stories with old friends and family about the meals they had experienced together at the home of her mother and father, Filomena and Antimo. JoAnna then began to realize how those experiences had created beautiful and lasting memories in the minds of those who had dined at Mother Filomena’s table.

When thinking back, JoAnna, the youngest girl in the family, began to reconstruct memories of the time she had spent helping her Mother prepare for special meals for family and relatives and helping to decorate.

Filomena was a Loving Mother and Always a Gracious Hostess

Although Filomena and her family came from a simple upbringing, she always had an air of “propriety” about her and her dinner table. She was very fastidious and spent hours making sure that everything was just right for her meal and in her home. Although she had many children and other responsibilities to occupy her time, there was always a freshly ironed tablecloth (never any wrinkles!), a few simple flowers from her garden or a little handmade decoration. Filomena always managed to make dinner warm, welcoming and comfortable – and of course, always delicious! As you can imagine, she frequently had a house full of family and friends or relatives for dinner! 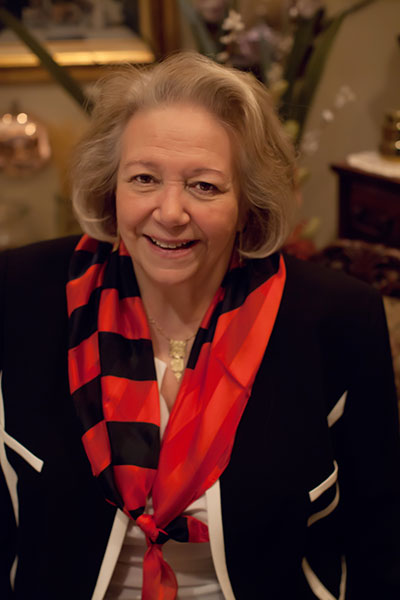 This ability to make an evening special, seemingly without effort, is what inspired JoAnna to create FilomenaRistorante. If she could recreate her mother’s special dinners on a grand scale in a restaurant setting, she knew there would be a place for the restaurant in the Washington, D.C. dining arena. The entire project eventually became a living shrine to Mother Filomena.

To make the restaurant feel like home, JoAnna transported some of her mother’s furniture to the restaurant and set up a dining room (our Filomena Kitchen) that looked similar to Mother Filomena’s dining rooms over the years, dominated by the large heavy oak table, carved matching chairs, and a large intricate sculpted Murano glass grape chandelier.

JoAnna also brought tons of her mother’s antiques and knick-knacks to give the restaurant her mother’s style. Even the music chosen for the restaurant was reminiscent of the type of Italian street songs Antimo liked to play on the concertina in his youth or listened to because they reminded him of his boyhood home in Abruzzi, Italy.

Filomena, whose family also originated from the Abruzzi region of Italy, was a great cook. She had grown up learning very traditional Italian cooking but found that sometimes it was very difficult to find many of the traditional ingredients. Being very creative, Filomena adapted many of her recipes to use what was available to her. Many of the original items that JoAnna chose to put on her menu were inspired by Mother Filomena’s simple, yet creative cuisine, as well as those wonderful old world traditional recipes—some of which were prepared for the daily meal, for Sunday dinner, when company called, or for specific holidays.

FilomenaRistorante’s doors opened on May 23, 1983 and since that time, people have packed Filomena to catch a glimpse of an all but forgotten time when the dinner table was not only the center of family life, but also the source of entertainment, wonderful memories, and great satisfaction for all.

Mother Filomena had 10 grandchildren and 13 great grandchildren. She died December 13, 1990, but her ability to make life special lives on at FilomenaRistorante. The plaque at her gravesite appropriately says it all. It reads: “She lived her life for those she loved.”